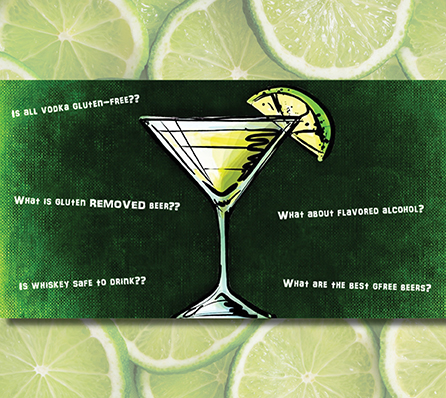 When you first begin a gluten-free diet, it’s also really important to not only consider the food you eat but also the beverages you’re consuming as well. Many people think that once they’re gluten free, they are no longer allowed to drink alcohol.

This isn’t the case at all; just because you don’t consume gluten anymore, you can still enjoy a drink socially. The only difference is you just have to research the best option for you, especially with the festive season already upon us.

Other gluten free alcohols include:

Also, if you choose to have a cocktail, always check the ingredient list to ensure it’s made up of gluten free alcohols. Be aware of pre-mixed alcohols as well as blended scotches and bourbons. Some whiskeys, bourbons and scotches are also aged in barrels coated in wheat paste. People who are very sensitive to gluten can react to these drinks!

If you are drinking during the festive season, drink in moderation and enjoy!